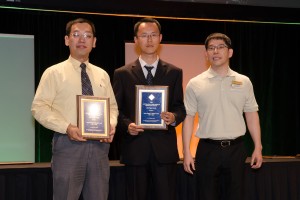 The ACM Transactions on Design Automation of Electronic Systems (TODAES) has presented a Best Paper Award to Jason Cong, W. Jiang, B. Liu and Y. Zou for their paper Automatic Memory Partitioning and Scheduling for Throughput and Power Optimization, 16(2), April 2011.  This is the third time that Professor Cong's research group has received a TODAES Best Paper Award.  Other awards were received in 2005 and 2012.